Patrick Berkhof is the author and architect of the fantasy world of Dizary. He debuted in 2016 with Dizary – Het Levende Systeem (‘The living system’). Since then he has produced four books, such as Demonen van Myradé and the stories of Jalvin. He has also published various short stories in the SF and fantasy genres with other publishers. Patrick’s day job is working as a design engineer on science fiction-like projects, like the development of robots and drones.

His Dizary project is a unique project that is open to guest authors, artists and game makers. Seven books have appeared in this series so far. These include Johan Klein Haneveld’s novella Acmala, Jasper Polane’s Panda and Het zwarte Dat, and Marieke Frankema’s Zielenlezer van Turion. Patrick knew from the start that his made-up world of Dizary would be more than just a book. By now, the world has been expanded with illustrations and 3D prints, soon to be followed by a game. The project will be used for a good cause: help people build up their imagination. Because imagination helps you grow.

The world of Dizary is a massive labyrinth in which various fantasy stories take place. Each story can be read as a stand-alone, but they are all linked with the others. You can discover the greater story by reading more than one Dizary book. Patrick started in 2016 by writing Dizary – Het Levende Systeem. This story is a good introduction into the world. In it, six people meet at a peace guild. Each of them has their own secrets, but still they have one thing in common: a magical sign of punishment on their hand. They have seven days to do a good deed, or else they’ll die.

It should come as no surprise that Johan Klein Haneveld (b. 1976) has trouble sitting still. Since debuting in 2001 with his SF novel ‘Neptunus’, he has published 24 books in various genres and subgenres. The latest of these are space opera ‘De zwarte schim’ from 2022 and dystopian novella ‘De groene toren’ from 2021, also YA SF novel ‘Het denkende woud’ and future horror novel ‘Scherven vol ogen’. His most recent fantasy novel is 2020’s ‘Hoeder van de vulkaan’. In addition, he edited a collection of climate fiction (‘Voorbij de storm’, 2020) and a collection of pub tales (‘De bar met de duizend deuren’, 2022).

Early March 2023 will see the publication of his 25th book, SF short story collection ‘De laatste verkenner’, to be followed in July by ‘De laatste detective’, published by the Fantastische Vertellingen Foundation. After that, in September 2023, a new collection of climate fiction will appear, entitled ‘Welkom in de broeikaswereld’ and edited by Johan. His short stories have appeared in recent years in collections such as ‘Ganymedes’, ‘Verhalen Vertellers’ and ‘…In de polder’, in magazines such as HSF, Fantastische Vertellingen and SF Terra and online. Some of his stories have been translated into English. In 2022 he won the EdgeZero Award for his short story ‘Ontsnappingspoging’.

Johan is also active in the fantastical genre in other ways. For one thing, he is the regular reviewer of Dutch-language SF and fantasy for ‘Fantastische Vertellingen’ and for another, he is part of the judging team of the SF/Fantasy writing competition organised by Godijn Publishing. Every month, he appears as a guest on YouTube channel ‘Schrijver Omnia’ to talk about SF, fantasy and horror. He also writes a column for the non-fiction editions of HSF magazine and selects his ‘top 5’ on a regular basis for Modern Myths.

If he has any time left besides writing, Johan mostly spends it reading SF novels and comics. He enjoys looking after his five aquariums, in which he keeps turtles, frogs and shrimp, as well as unusual fish, such as cichlids and a freshwater sole. With his wife Bianca he likes to visit zoos and museums. He funds his passions with his job as editor for the Dutch Veterinary Journal.More information, among which a complete list of his publications and books to date, can be found at JohanKleinHaneveld.blogspot.com.

Roderick Leeuwenhart (1983) writes mainly science fiction, with the occasional sidestep to other speculative genres such as dark fantasy and horror. A fascination for Japan and East Asia runs through all his work. His latest SF novels are ‘De Heren XVII’ (published by Quasis) and ‘Sterrenlichaam’ (by Iceberg Books). He won the Harland Award, the top prize for speculative fiction in the Netherlands. His work has been translated and published as far afield as China.

Remco Meisner has been around for quite some time, mostly by publishing fantastical detective stories (Snuffel series), novellas, novels and short story collections (Rare Boekjes series), and magazines such as Fantastische Vertellingen and Tjonge (the latter being the smallest glossy in Europe, at only 35×40 mm). He started doing this in 1979 while still in secondary school, and still doesn’t know that it’s wiser (and pays more) to publish Common Literature. Perhaps it’s better this way, because artists and authors in the fantastical world are a pleasantly fascinating lot.With their talk on the yearbook Ganymedes, how one might end up in same, and a couple of bizarre actions undertaken between 1979 and 2003 Paul van Leeuwenkamp and Remco Meisner jointly hope to entertain the esteemed crowd at HSFCon. And remember: we love it if our chat is interrupted by a question or a random remark, so feel free and do so without constraint.

Like a spider in her web, that’s how Marieke weaves together all the various aspects of her life. A number of those crisscrossing silver threads stand out, thick and shining, because they mean so much to her. Some threads connect her to the stage, a place she likes to be. A musical here, a dinner show there, or maybe just to sing a pretty song somewhere. She also records audio books and is a voice actor in films, TV series and ads, among other things. She helps other people feel better with her Morning Magic and her advice on healthy living, and she offers coaching on spirituality and personal development.

The strongest of all threads is the story thread. Stories come out as silvery lines, curving and twisting through the web of her life. Her stories have been published in Pure Fantasy, Upturn and The S-word, among other publications. She has written eleven books and has seen her stories appear in various anthologies.

New books are on their way. All of them will contain a glimmer of magic, because Marieke just loves to grab the little bits of everyday magic and let them shine through in her stories.

Pen Stewart (Ghent, 7 April, 1977) is a fantasy, scifi and YA author and an artist, editor and speaker. In 2015 she published two short story collections: ‘Nanokanaries en olifantenhersenen’ and ‘Tijd M.A.N.Chine’. These were followed in 2016 by ‘Opgejaagd’, a gothic horror story published as part of the ‘splinters’ series by publishers Quasis, and in 2017 by her first fantasy novel ‘Wintercode’, which was illustrated in colour. In 2020 appeared her novel ‘Onderuniversum’, set in a dystopian future. Thanks to ‘Wintercode’ Pen became the first fantasy author in Flanders and the Netherlands who was awarded a scholarship with Literatuur Vlaanderen for an epic fantasy novel.

As a teacher of writing she started the first school for fantasy writers in Flanders, through ‘Creatief Schrijven’ in Antwerp. She collaborated on various short story collections and was nominated for awards at a good number of Flemish and Dutch writing competitions. In 2013 she won the Phoenix Award at the Harland Awards. Pen is also the founder of ‘Artistic Chapters by Pen Stewart’, which offers training in writing, training in reading (secondary schools), proofreading services, workshops and editing services. Teachers and librarians can book lectures by authors with financial support from Literatuur Vlaanderen through auteurslezingen.be, or in the Netherlands through De Schrijverscentrale. Pen also organises long-term writing courses to help schools stimulate reading in children and she helps the schools find the necessary financing.

For the Buckminster College project of the Vrije Universiteit in Brussels she is “Praeceptrix Phantasiae”, and in the school year 2023-2024 she will start teaching a course on how to write fantasy, aimed at highly gifted students.

In 2022 we announced the first (honorary) guests for HSFCon 2023. We are happy with Kees van Toorn, Martijn Lindeboom, Teun Joshua Brandt and Ghostbusters Dutch Division.

We wish everyone a fantastic new year and a great HSFCon, where we look forward to seeing you! 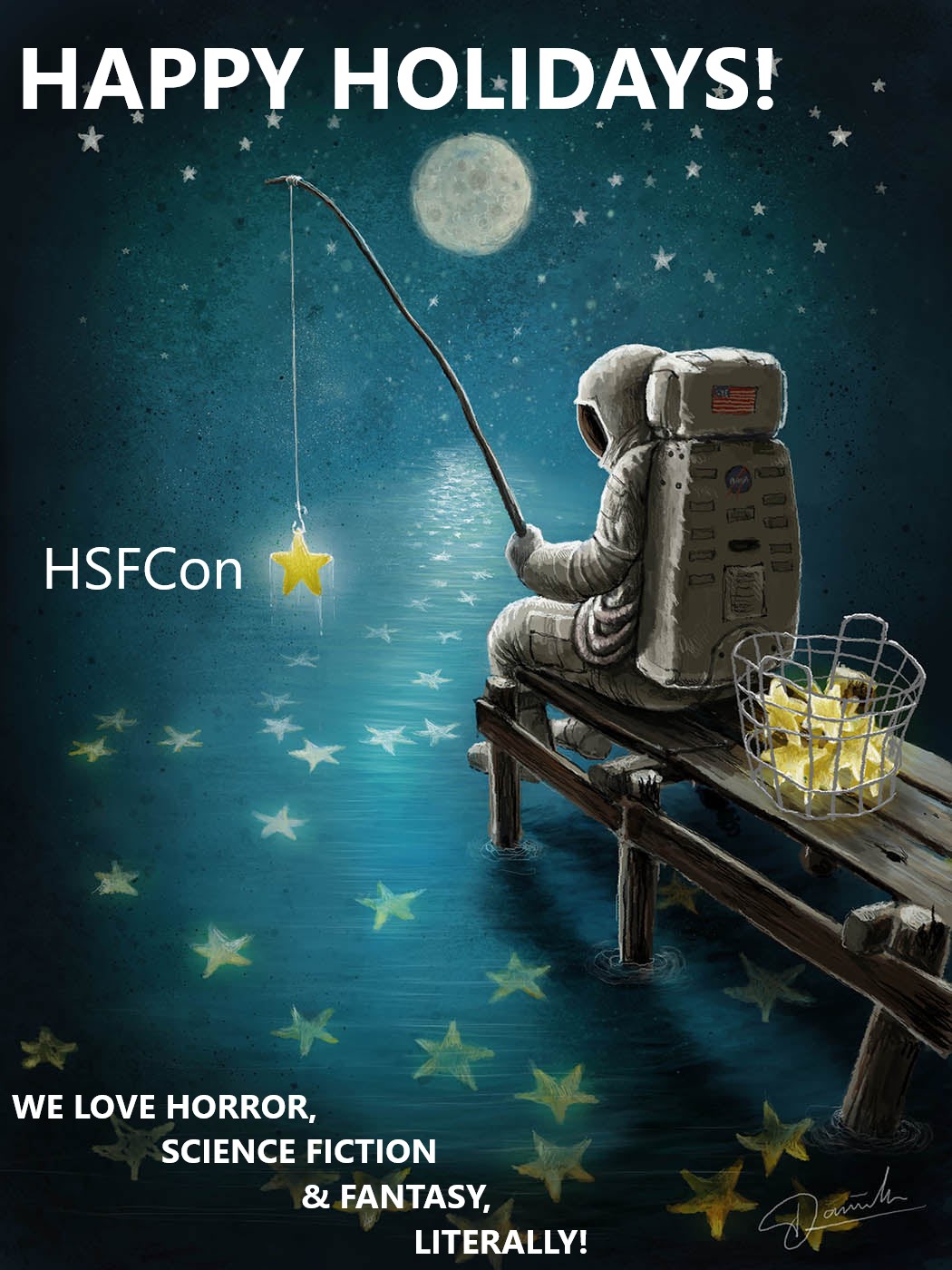 The Ghostbusters Dutch Division (GBDD) has been the Dutch Ghostbusters cosplay group run by fans for fans since 2012. Apart from having costumes and props that seem to come straight from the film, GBDD are also a group that celebrates Ghostbusters fandom with anyone who wants to join. Whether you’re a fan of the classic films, the cartoons, the reboot or the games, there’s a place for everyone with GBDD. Members of the group have been keeping both big and small events free of ghosts for years and also support various charity initiatives with their cool props and of course Ray Parker Jr.’s iconic theme tune.